Twinjet will serve as inflight test bed and simulator for iSTAR

April 25, 2018 (ILA, Berlin ) German Aerospace Center DLR and Dassault Aviation today signed an agreement for the acquisition of a Falcon 2000LX twinjet. The agreement was signed at the Berlin Air Show in the presence of German Chancellor Angela Merkel.

The deal entails the delivery of a Falcon 2000LX and its transformation into an inflight Systems and Technology Airborne Research (iSTAR) vehicle capable of testing flight characteristics of new aircraft designs, real or virtual, piloted or unmanned, in real life operating conditions. In addition, iSTAR will serve as a test bed for aerodynamics, aeroelasticity, structures, propulsion, flight control and flight guidance applications.

“Dassault is granting DLR access to its internal development know-how and extensive experience in aerodynamics” said the Chair of DLR Executive Board Pascale Ehrenfreund, describing the special partnership. “The 2000LX has the performance and safety margins we need for a research vehicle and considerably reinforce our ability to conduct interdisciplinary research across the entire aviation system.”

The Falcon 2000LX being acquired is a development aircraft that has been used by Dassault for flight testing and development purposes. It will be transferred to the company’s Bordeaux-Mérignac facility for initial conversion to a conventional flight test bed to be operational by 2020. The vehicle will later be returned to Dassault for two further conversions intended to achieve full iSTAR test bed capability. These phases are to be completed by the mid-2020s.

“The iSTAR vehicle will provide DLR with an inflight simulation capability. This is a powerful tool to assess the flight characteristics of newly designed aircraft configurations under realistic conditions,“ says DLR Executive Board Member for Aeronautics Rolf Henke. “It will greatly facilitate the development of new environmentally friendly and efficient aircraft configurations and components. Moreover, it will permit the inflight evaluation of increasingly automated pilot assistance systems, including auto-taxi and take-off, and enhance the testing of unmanned aircraft and their integration into the controlled airspace.”

“DLR is one of the world’s largest and most respected aviation research centers and we’re proud to be a part of this ambitious new in-flight test and research program” said Dassault Aviation Chairman and CEO Eric Trappier. This undertaking will greatly contribute to improving the safety and efficiency of man and unmanned aircraft which is our top priority in the aviation industry.”

The completed vehicle will be based at the DLR site in Braunschweig, Germany and will be available to other national and European research institutes as well as to aircraft manufacturers and suppliers.
Nach oben 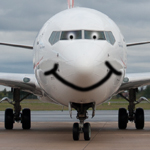